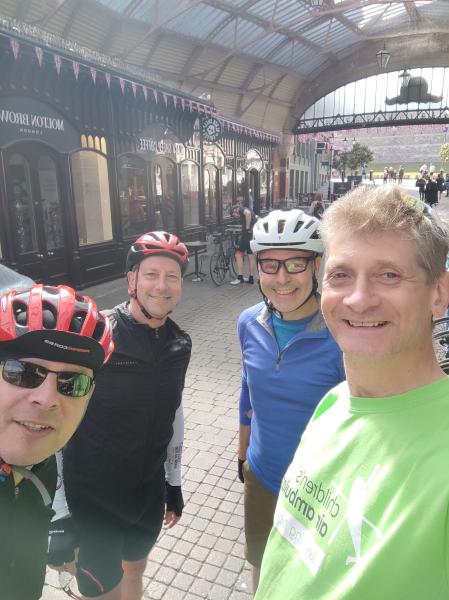 We had a core of four turn up with apologies  from a few others who couldn’t make it, but we four thought it a wonderful way to spend our morning on Fathers Day!

Arriving in Windsor all ready, some more ready than others…. David seemed to be ready for a week long cycle ride, I should have worked out how the App I was using would show the route whilst I was actually out on the ride…. In the end we knew the route so it was not an issue but I’ve learned a lesson for next month’s ride!

We set off into Eton then towards Cookham on lovely flat, and not too busy roads, before the climb up out of Cookham that then leads down into Marlow. The weather was perfect for cycling, not too hot and dry so we picked on the park for a coffee and a chat, catching up on what we were all up to in our lives. 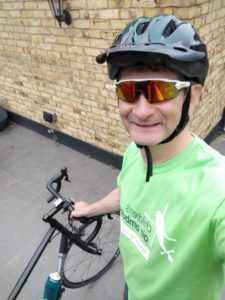 Next, we split into two  groups so that Mike and Dave could cycle home towards Reading and Chris and I went off to Bourne End and then I swung off towards Windsor – but flexibility is the name of the game with these rides so we don’t pressure anyone into doing something they don’t want to do.

Overall a lovely ride and great to catch up with everyone.

Looking forward to the next ride.

How I looked at the end…not too bad – I’ve looked worse!

We have sorted out a couple of events for the summer – ordered great weather and fixed dates in the diary.

As usual it’s very informal and just a chance to get a few people together for a bike ride and a chat….

Charity – its not a “have to” its a “want to” and strangely enough both David and I (Paul) have separately seen presentations by the Air Ambulance (and the Childrens Air Ambulance is part of this) and been grabbed by what they do and the costings…. there are a few facts that stunned us both.

What I personally don’t understand is why certain charities are not funded in some way by the Government. The RNLI spring to mind.

Is it that someone in Government thinks the public will dig into its pockets to support these so they don’t have to….just saving money?

I’d be interested in hearing what the charities say about this, I am very obviously not an expert.

But anyway – this is our current charity so please support this if you can.

Welcome to the world of Zwift! Zwift is essentially a video game that keeps you fit. Watopia is a virtual world and is one of the 8 worlds Zwift has created and the only one which is not based on a real-world place. The other “worlds” you get to ride in are London, Paris, New York, Yorkshire, Richmond (CA), France, and Innsbruck.
As the winter months of 2020 loomed, I started to investigate my indoor cycling options. I had tried a turbo trainer before, but I was always bored within 5 minutes and found it to be more torturous than fun. With some help and advice, I bought a Turbo Trainer, connected to the Zwift app via my iPad, the Zwift Companion app via my phone and have not looked back since! A friend warned me that it is addictive. I did not believe him, I should have!

You must not expect real world graphics. Zwift decided to have a graphics style that works to get people riding and not to look like the real world. What it gives you is many ways to keep you motivated and to keep you riding. There are badges to be collected for every route you complete and “drops” to be collected for every mile you ride and “Ride on” you receive. “Drops” are the currency of Zwift which allows you to “buy” virtual bikes and wheels.

There is a route to cater for every need, the shortest at 1.9 miles to the longest at 107.9 miles. There are hilly routes and flat routes, there are workouts, races and group rides that are free to join. You can ride with professionals; you can create a meetup and ride with friends. Most people are super friendly and will give you a “Ride on” – like the real-world nod or wave at a passing cyclist! In August 2020, they added Pace Partners. These are Bots that ride at a consistent pace on a particular route. You can join the bot who rides closest to your pace and see if you can keep up. And if you want the experience of being able to talk to anyone in a group ride (if it is advertised as having “discord”) you download the “discord” app to your phone and you can have a good old natter with your fellow riders.

Zwift is not the only indoor training option out there, but it is possibly the one with the greatest community. I have read so many testimonials on various Zwift Facebook groups I follow where people share how the Zwift community and the motivation, they get from Zwift Group Rides, races, and workouts has helped them during the emotional turmoil of lockdown or how they have got back to fitness after illness or injury or even found fitness for the first time in their lives! It is also accessible to people with varying disabilities. Zwift must be doing something right because as of November 2020, they had grown their subscriber base by 270%. At popular times there can be around 28000 riders riding at the same time!
Now my quandary is do I keep my Zwift account going through the summer? – it’s so convenient to pop into the garage for an hour – or should I pause it and restart again in November?

It is widely accepted that exercise can increase your lifespan by reducing the risk of chronic disease such as Diabetes, Heart Disease, Asthma, Dementia, Arthritis, Cancer, and the list goes on. Cycling boosts your immune system, improves mental health, slows down the ageing process and is less stressful on the joints.

A study by the University of Reading and Oxford Brookes University found that the extra pedal power provided by an E-Bike enabled more mature riders to explore their local area, to have opportunity to interact with people and the natural environment, secure in the knowledge that power-assist would get them home stress-free. It was found that cyclists between 50 and 83 years old, on E-Bikes, experienced increased cognitive and mental health benefits compared to a normal bike.

“It is really encouraging, this research suggests older adults’ cognitive function – particularly what we call, executive function, as well as processing speed – could be improved by cycling in the natural or urban environment, even when that was on an electrically assisted e-bike.” – Lead researcher Dr Louise-Ann Leyland”

As E-Bikes move out from the realm of the eccentric into the mainstream cycling scene, even youngsters are riding them! The current World E-MTB champion is British born Tom Pidock, at the tender age of 21! We were sceptical about the merits of an E-Bike …… but keep reading, they have a lot going for them.

The following quote is from an article written by Sim Mainey for the MBR (MTB Cycle magazine) after riding an e-bike for the first time in a e-bike MTB race series:
“The trail we ride up would make an awesome downhill – rocky, lots of ledges, loose corners. This is the moment it clicks. This bike lets me ride up what would be impossible on an ordinary bike, potentially opening up a whole new way of looking at rides. With an e-bike the uphills can become the best bits. I arrive at the top lungs gasping and mind blown.”

What’s it actually like to compete in an e-bike race?

Thank you to Kehorne’s Kathy Turner for writing this article – Kathy is a keen cycling enthusiast.

Visit our Just Giving page to donate. Every little helps and 100% of the money donated goes to charity, we spend our own money to do the trip.
This is just for Kehorne so don’t think for one minute you are expected to get involved in this side of the trip!

Day 1
Earlier train Saturday morning to Paddington (currently the 8:08 from Slough, arrives Paddington 8:22), cycle to Kings Cross (25 minutes), train to Cambridge at 09:12, arrive at Cambridge at 10:00 am
Then Cambridge to Milton Keynes – 50 miles (roughly 5 hours cycling, with an hour for lunch)

Train details – The slow trains to Paddington do not need any booking for cycle space bookings, only the fast train.
Train from Kings Cross to Cambridge – no cycle space needs booking – just turn up and jump on!

Day 2
Cycle from Milton Keynes to Oxford – 40 miles (roughly 4 hours cycling)
Train from Oxford to Slough – 16:30, arrive at Slough at 17:13 – again fast trains need cycle spaces pre-booked, slow trains no problem.
But, there are options other than that, cycle further, stay in Oxford or get the train back. 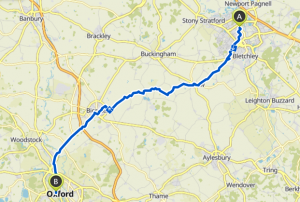 Evening in Milton Keynes…assuming anyone feeling like it, we propose just wandering out of the hotel, finding a nice place to eat and go for a couple of drinks… nothing big or late…we’re too old!

We have a plan to do a cycle ride along the Cycle Route from Oxford to Cambridge in mid to late August with an overnight stay in Milton Keynes.

Just a plan at this stage but hopefully we can get a few people together …. keep an eye out for more info as the plan comes together….

Well, we had originally planned to start doing casual weekend bike rides in the spring, but what with ‘one thing and another’ that has not been possible. So until we have a clear idea on when we can actually meet as a group we are not planning anything. Our current plan is to start doing them in the Autumn, and they will be organised routes with clear start and end points and times, of varying distances and complexity.

Our first one will be a round Reading route, with a stop at the Lodden Brewery, then through Henley and back to Reading. The whole route is 19 miles, and has one biggish hill and another smaller hill.

We are posting pictures of our rides on Instagram (https://www.instagram.com/itsonlycycling), and if you want to be featured, use the #itsonlycycling tag on your posts.

Check back soon, to see if we have any updates, stay safe, keep cycling 🙂

This website uses cookies to improve your experience while you navigate through the website. Out of these cookies, the cookies that are categorized as necessary are stored on your browser as they are essential for the working of basic functionalities of the website. We also use third-party cookies that help us analyze and understand how you use this website. These cookies will be stored in your browser only with your consent. You also have the option to opt-out of these cookies. But opting out of some of these cookies may have an effect on your browsing experience.
Necessary Always Enabled
Necessary cookies are absolutely essential for the website to function properly. This category only includes cookies that ensures basic functionalities and security features of the website. These cookies do not store any personal information.
Non-necessary
Any cookies that may not be particularly necessary for the website to function and is used specifically to collect user personal data via analytics, ads, other embedded contents are termed as non-necessary cookies. It is mandatory to procure user consent prior to running these cookies on your website.
SAVE & ACCEPT