We picked a good weather day! 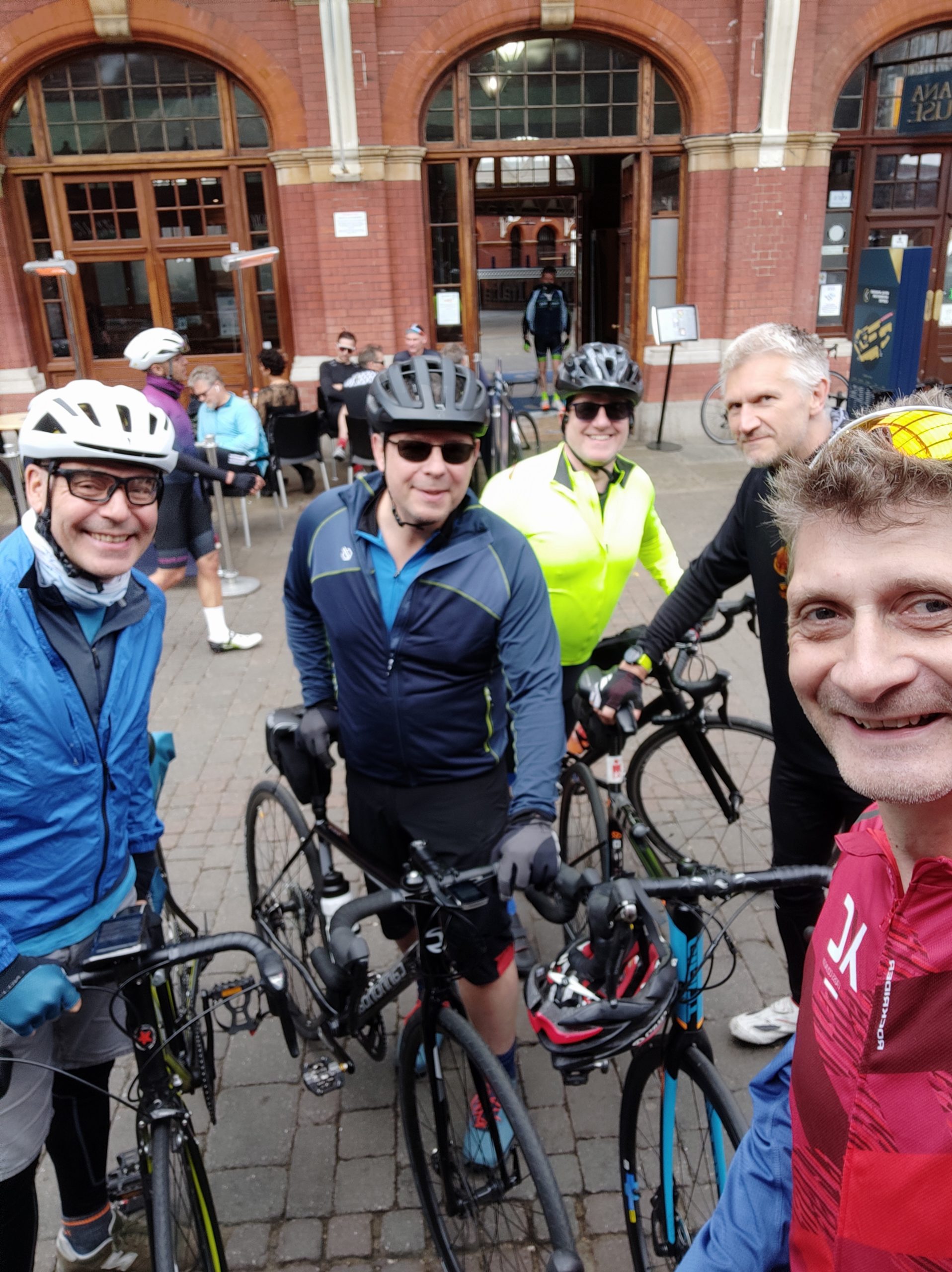 We set off from Windsor on time – David Horne (in charge of route planning), Paul Fogg (head of coms – I had all the phone numbers), Mike Rose (drafting king), Gary Hook (far too fit – training run) and Darren Evans (so 60 miles not enough)!

We picked an unfortunate route start out towards Maidenhead as the M4 was closed and thus the road was pretty busy but soon got off that and headed towards Cookham, always a lovely stretch of road. We then headed towards High Wycombe and ended up going on a few cycle paths which made the going slow but turned into the back of High Wycombe and after losing Gary for a while stopped for a coffee before heading out towards the Chilterns proper and destination Chinnor – we hit the first big hill, rounded a corner and there it was! Dave decided to have a break half way by falling over in the middle of the road, unfortunately most of us missed his comic moment!

Beautiful surrounding in the Chilterns makes the hills worth the effort and we got to Chinnor for lunch, although the café I had picked (all my fault) had almost run out of food as they had a fair going on next door…Chips or chips anyone? But the sun was out enough for us to sit outside and keep warm. Note to self… pick a pub next time…

After leaving that we had a route re-plan as the current one seemed to be taking us far to many times onto some pretty rubbish cycle routes without even tarmac…. so many thanks to GoogleMaps and pretending we were cars got us on the way to Watlington and onto routes that a few of us already knew going past Stonor and into Henley for another coffee break.

Having decided that knees had had enough of big hills we cried off the Remenham hill and went out to Wargrave and back into Windsor on the  A roads saying good bye to Gary and Dave in Maidenhead.

Some rather keen members did a fair bit more – and it wasn’t Paul, Dave of Mike!

Really enjoyed the day out and a chance to do some miles in great company, good to catch up with people and meeting Darren in the flesh was excellent…. too many Zoom meetings!

Looking forward to our next planned event…..

We will be doing a round trip route from Windsor to High Wycombe to Marlow to Maidenhead and back to Windsor.

Approx. mileage for the day out would be about 58 miles at a leisurely pace with appropriate stops for lunch and coffee along the way. If we get the timings right we might be able to have a staggered start so people can meet up at slightly easier points.

Start in Windsor at 9.30am from the Cinnamon Café in the Central Station area.

Lunch is planed to be at White’s Field Community Hall, Mill Lane, Chinnor OX39 4RF http://whiteswindmillcafe.co.uk/ where we will be out in the sun topping up the suntan!

This route should be available to download so anyone can join in and dash off if they wish to.

Registrations are closed for this event

This website uses cookies to improve your experience while you navigate through the website. Out of these cookies, the cookies that are categorized as necessary are stored on your browser as they are essential for the working of basic functionalities of the website. We also use third-party cookies that help us analyze and understand how you use this website. These cookies will be stored in your browser only with your consent. You also have the option to opt-out of these cookies. But opting out of some of these cookies may have an effect on your browsing experience.
Necessary Always Enabled
Necessary cookies are absolutely essential for the website to function properly. This category only includes cookies that ensures basic functionalities and security features of the website. These cookies do not store any personal information.
Non-necessary
Any cookies that may not be particularly necessary for the website to function and is used specifically to collect user personal data via analytics, ads, other embedded contents are termed as non-necessary cookies. It is mandatory to procure user consent prior to running these cookies on your website.
SAVE & ACCEPT